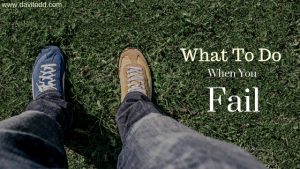 When You Fail, Dont Stay Down.

We have all probably heard the famous Thomas Edison quote, “I have not failed.  I’ve just found 10,000 ways that won’t work.”  They key to his success was learning from the first mistake and doing something differently the next time he tried to reach his goal.   When you fail, you need to be like Thomas Edison!  Dust yourself off and try again.

Let’s take a minute to look at some things to do when you fail to get back on the horse again.  Each failure, when properly analyzed can be a stepping stone on your path to success.

Relax and Step Back

Don’t be too hard on yourself when you dont meet a goal.  If you’re anything like me, it’s pretty easy to brow beat yourself for not reaching an expected goal.  Yes, we want to meet deadline and crush our goals, but spending to much time kicking yourself while down hinders your bounce back.

Next, you will want to break down the steps you took in your attempt to reach your goal.  Have you ever woken up and thought, how did I get here?  Sometimes we don’t really realize how certain decsions will hinder our progress on the road to our goal.  For example,  if you have a financial goal to save a certain amount of money in a week but you give in to the temptation of buying a Dunkin Donuts iced coffee every day on the way home from work or school, you’re shooting yourself in the foot.  Without really realizing it, you’ve spent $10.75 or more.  Small decisions can add up to a derailing quickly!

Perhaps you plan to write a novel and you set a goal to finish the entire manuscript in 4 months and then you fail to reach the goal.  Begin to take inventory by asking yourself some questions.  1) Did I have a good idea for a story?  2) Did I make an outline of the basic story? 3) Did I think through my main characters?  4) Did I set small daily writing goals?

As you answer the questions you have about your failure it becomes easy to identify your weaknesses.  For me, failure to meet a daily writing goal happens a lot.  Some of this is the season of life I’m in and some of it, if I’m honest, is just poor time management skills.  These are examples of things I have actually failed at in my daily life!  You now have the priviledge of learning from my mistakes.

Remember failure is an event, not a person.

Failure happens to the very best of us.  In fact, it’s a vital part of learning.  Both failure and success are just an event that happens, neither are people.  If you show me a successful person, Mark Cuban comes to mind as I write this, I’ll show you a failure too!

It is so very imporant and liberating to remember that a failure is simply an event in your day, like the page on a book.  This failure does not and will not define you as person.  My husband often says that life is 10% what happens to you and 90% how you react to it.

A success, lottery winners for example, can quickly turn into failure if you react to it wrong.  Often we see lottery winners spend money so quickly that they don’t have enough money for taxes and end up with a large IRS problem.  Inversely, a failure can spur innovative thinking and creativity that can launch a new product, a new career, Lydia Senn’s virtual assistant career comes to mind, or maybe even a new scientific theory!

Failing isn’t really the issue, the issue is refusing to learn from the event.  I’m sure you’ve heard of “the school of hard knocks.”  Using a failed circumstance as merely a learning expierence is what that saying refers too.

You can go to school and get a degree in buisness and still not learn everything you need to know about your business.  The failures you meet along the way on the road to building your business are going to provide valuable lessons you just can’t get in the class room.

I remember years ago in EMT training we had drill days to practice our skills that we studied in books.  Everything reads well in the books but it’s very different when you try to put a C-Collar on a person in  an actual squashed car.

In high school my brother watched all of games on video so he could identify his weakness or point of failure during a game.  By doing this week in and week out over the course of his high school career he was able to improve significantly faster than those who relied solely on the coach’s observations.  He won many achievements and awards by using failure as a teacher and we can do the same.

Failure is NOT an Excuse

Finally, failure is not an excuse to give up.  My father always told me that nothing worth doing is easy.  Maybe that’s not exactly true since eating is relatively easy but, his point was clear.  Worthwhile things take time and commitment.  If something goes wrong, we need to be problem solvers and not quitters.

Winners don’t always win but a quitter will certainly never win.  Failure can drive us to educate ourselves better and change tactics but it should never be an excuse to just give up.  What if you are only one failure away from success?  Don’t let failure scare or stop you!  Remember it’s not a person, it’s just part of life.

In fact, Jesus told us to expect to fail at some point!

Luke 16:9 And I say unto you, Make to yourselves friends of the mammon of unrighteousness; that, when ye fail, they may receive you into everlasting habitations.

Since we now know that failure will always be a part of life,  we need to prepare ourselves to face many times over the course of our lives.   Failure doesn’t have to be a terrifying monster.  It is something we can tame if we view it differently.

Tom Corley has a great book that show us how our daily habits can be a point of failure.  I highly recommend giving this book a good read!  I bought my copy on google play books with some reward money.  I’ve linked a hard copy version from Amazon here.  I enjoyed this book so much, I ordered one for my public library.

In order to accomplish great things one must be willing to risk a great failure.

“It often requires more courage to dare to do right than to fear to do wrong.” —Abraham Lincoln

I hope this has helped you to view failure in a new light.  Please comment below, I love to hear from readers.

7 Replies to “What To Do When You Fail”

This site uses Akismet to reduce spam. Learn how your comment data is processed.